Ahoy there me hearties! 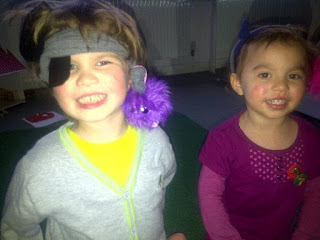 Here are Raffy and sis playing pirates today! They came up with the headgear when they found the fabric offcuts when I shortened some pyjama trousers. Raffy added an eye patch and insisted on having his new pom pom monster hanging off his bandana. Very Jack Sparrow!

The only thing he needed help with was attaching his purple monster! He is becoming much more spatially aware and physically self aware. Does that make sense? He is a very awkward mover and is still unconfident when negotiating any step/s or irregular surface, especially if it is new. He finds it difficult to locate his body and fully 'inhabit' his body. He has low muscle tone and a wobbly gait. However he is gradually taking ownership of his physicality through confidence and lots of easy Son-Rise techniques during play.
We have lots of action based games in the playroom and we strongly encourage Raffy to join in by 'modelling' the action and them specifically telling him how to move and position himself to achieve it.

Last night was wash and trim night. I always cut his hair and it's generally a grab and hack scenario with lots of mess. It was bedtime and I didn't want to hoover so I found a lid from a cardboard box and told Raffy to hold it underneath the scissors! Amazingly, he held it up and moved it around his head when I asked, to catch the strands when they fell. I helped position the lid but he kept it still and the whole operation was very smooth. Great advances in attention span, taking directions and muscle tone!

In fact every day Raffy is doing new things. Some may sound simple but they are adding up to a boy who is increasingly unifying and grounding himself.

Here are some varied examples...

Sitting down to eat with us
Sitting down in a cafe to eat (instead of running off immediately!)
Asking 'Why?' questions during role play games
Sitting on the toilet (watch this space!)
Talking to other kids and wanting to interact (as opposed to talking 'at')
Drinking out of varied cups, bottles and through straws

Wearing socks in the house (normally barefoot)
Taking his own shoes and socks off when asked
Taking directions from a stranger (in a shoe shop, when getting his feet measured)
Trying several pairs of shoes on and then choosing his favourite! (A biggie!)


He is climbing that mountain!